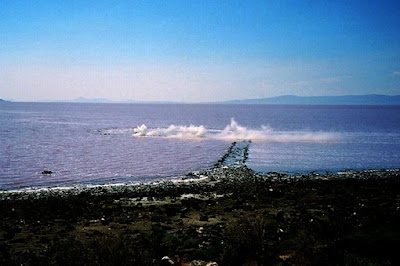 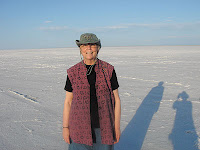 ... A perpetual lease would grant me greater security if I should ever have to invest more capital to repair or restore the jetty in the future, or transfer the lease to an art institution, should they want to own the Spiral Jetty and have it as part of their collection to preserve the work for future generations. ...

There's a word called entropy. ...It's like the Spiral Jetty is physical enough to be able to withstand all these climate changes, yet it's intimately involved with those climate changes and natural disturbances. That's why I'm not really interested in conceptual art because that seems to avoid physical mass. You're left mainly with an idea. Somehow to have something physical that generates ideas is more interesting to me than just an idea that might generate something physical.

The mere sight of the trapped fragments of junk and waste transported one into a world of modern prehistory. The products of a Devonian industry, the remains of a Silurian technology, all the machines of the Upper Carboniferous Period were lost in those expansive deposits of sand and mud. … This site gave evidence of a succession of man-made systems mired in abandoned hopes.

I have already demonstrated that it is possible to combine reclamation and art in two completed projects–the Broken Circle in a sand quarry in Holland which was slated for reclamation, and the Spiral Jetty in the Great Salt Lake, Utah near an old oil mining region. ...The artist must overcome the inequities that come in the wake of blind progress.